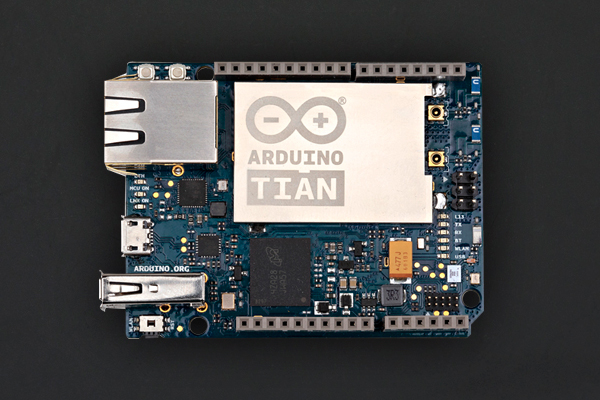 The Arduino TIAN is based on the Atheros AR9342 connected to an Atmel Cortex M0+ 32-bit microcontroller plus all connectivity: Ethernet, Wi-Fi, Bluetooth.

The new Arduino Tian board is powered by Atmel’s SAMD21 MCU, featuring a 32-bit ARM Cortex? M0+ core and a Qualcomm Atheros AR9342, which is an highly integrated MIPS processor operating at up to 533MHz and feature-rich IEEE802.11n 2x2 2.4/5 GHz dual-band WiFi module. Qualcomm Atheros MIPS supports a Linux distribution, based on OpenWRT named Linino. The Arduino Tian has also a build in 4GB eMMC memory that will can be helpful to build your projects. It is possible to Switch ON/OFF the Linux port from the MCU to reduce the power consumption.

NB: In some countries, it is prohibited to sell WiFi enabled devices without government approval. While waiting for proper certification, some local distributors are disabling WiFi functionality. Check with your dealer before purchasing a Tian if you believe you may live in such a country.

Note: Before starting to run Arduino Tian you need to install CP201x driver on the computer drivers