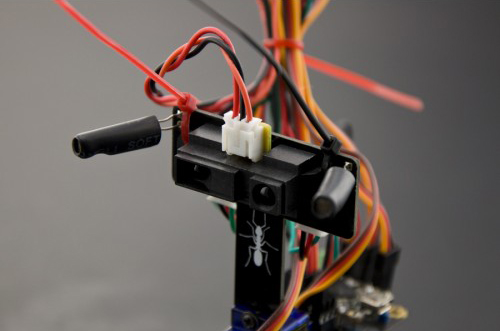 A distance sensor is the most important sensor for any robot. It's usually referred to as the "eyes" of a robot. Distance sensors are very useful as we can make systems that react based on how close we are to them or based on the presence of various obstacles.

To build a distance-controlled LED, we will need the following parts:

Step 1: How to Connect the Sensor

Connecting a Sharp IR is easy. Maybe this is why it's so popular. Follow these simple steps to connect one:
But please don't exceed a 3 mm, 10–20 mA LED. No high-power LEDs here! It could easily fry the LED or the Arduino. If we don't know how powerful our LED is, we should just mount a 220-ohm resistor in series.

Step 2: Code
The following code will read the value of the sensor, print it on the serial connection, and vary the LED intensity using PWM, to match the distance:

Distance sensors have a huge market with hundreds upon hundreds of different models. Generally, in the cheap, hobbyist section, we can either find infrared sensors—such as the Sharp IR—or ultrasonic sensors.
An infrared sensor has a very narrow sensing beam. This means it can detect objects in tight places without interfering with other objects. However, if an object is too thin or has holes in its body, the sensor beam might go through it and give false readings.
An ultrasonic sensor, typically called sonar, uses sound above the normal hearing frequency to detect distance. It does so by emitting a short sound pulse and waiting for it to return. It measures the time it takes for the sound to travel, bounce on objects, and then travel back to the sensor.
Because the speed of sound is known, the total time it takes for the sound to return is dependent on the distance to the objects. This creates a very wide sensing beam. It is useful in many applications, especially when we need to detect large, complex objects. However, the wide beam will create interference if we have two objects in range. It will always detect the closer one.
An important thing to remember is that infrared sensors are dependent on the color of the measured objects while sonar is generally not affected by parameters except the shape and distance of the object.