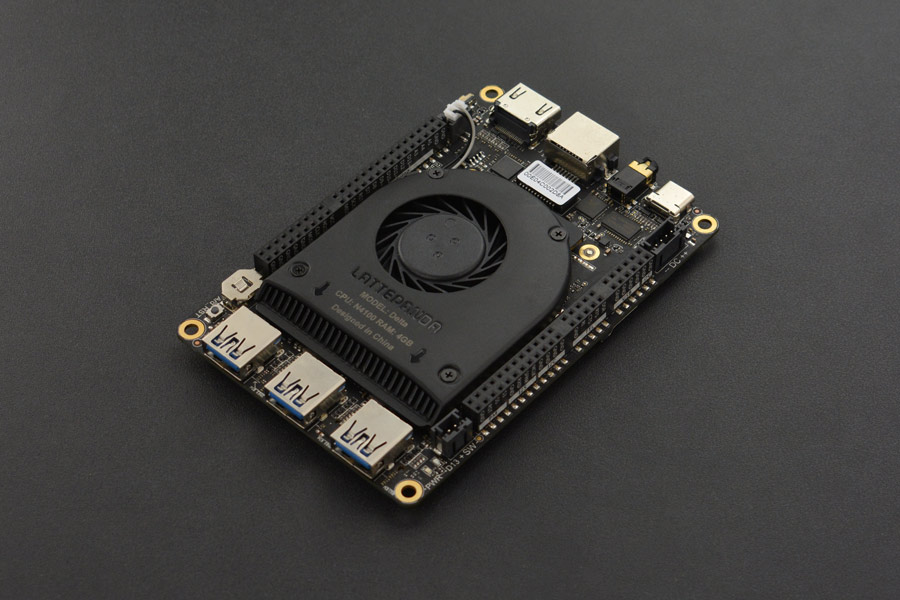 LattePanda 2 Delta is a high performance, pocket-sized SBC (single board computer) with low power consumption that runs full Windows 10 or Linux operation system. It is widely used in edge computing, vending, advertising machine, industrial automation, etc. Whether you're a DIY maker, IoT (Internet of Things) developer, system integrator, or solution provider, LattePanda is your powerful development board that can empower creation and accelerate your productivity.

The LattePanda 2 Delta, based on Intel Celeron N4100, is a Quad-Core 1.1GHz CPU that bursts up to 2.4GHz, Intel® UHD Graphics 600 integrated into the processor deliver enhanced media conversion, fast frame rates, and 4K Ultra HD (UHD) video. All of this computing power dissipates only 6W power, which is the perfect choice in terms of features and price as the main robotics controller, interactive project core, IoT edge device or AI brain.

The LattePanda is perfect for makers alike who need a small, portable, and light SBC for their ultimate project! DIY project running the Windows or Linux, LattePanda SBC has been a popular hit and choice for many people who wish to enjoy playing all of their old and new favorites from one small, powerful system. Given its incredibly small size, it can be easily hidden, functioning as the secretly powerful brains behind your coolest project ever.

LattePanda pre-installed Win10 pro operating system but also supports Linux. We have the complete installation tutorial in our Docs and provide the latest version support in time.

Embedded DisplayPort (commonly referred to as eDP) is a full-digital interface based on the VESA DisplayPort architecture and protocol, which can use simpler connectors and fewer pins to transmit high-resolution signals as well as allow higher transmission speeds as opposed to LVDS cables.

Another benefit of the eDP interface is that they allow you to easily connect your LattePanda directly to an LCD.

Type-C interface allows the seamless connectivity of data, PD power supply, and 4K video output, which not only solves the problem of messy desktop wires but also makes it more convenient to transfer equipment. With more efficient transmission capacity, richer expandability, simple and convenient connection, it has become one of the world’s consumer electronics standards.

In addition, LattePanda has more types of interfaces, which can be directly connected with, for example, HDMI and Internet cable. Independent USB 3.0 interfaces can be connected to USB2.0 & 3.0 devices. No need for additional docking stations to connect to peripherals, LattePanda can be embedded in your project like a plug-in device. Say goodbye to your bulky laptop!

The teams here at LattePanda have worked hard to provide careful and thorough guides and documentation for our products, and their effectiveness has become amplified by our strong community of LattePanda users who have made posts, threads, and contributions to others in the community. With our combined strength, no project is out of reach for any user!

Project 5. DIY Dual Touchscreen Windows 10 Computer! The LattePanda Alpha Delta MagClick Case and Tutorial
Introduction: This is the dual touchscreen case for the line of magnetically mounted cases for the LattePanda system.