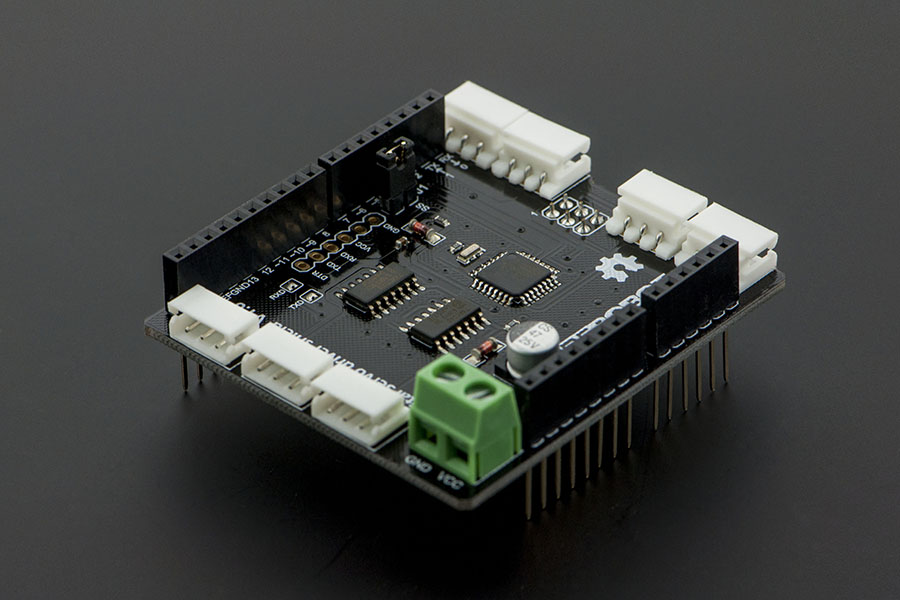 Some day,a guy want to make a robotic dog as a gift to his little son.He brought some digital servos, a microcontroller,Lipo batterys...Then he found it hard to drive these smart servos with Arduino processor! So we developed a driver board that can easily & quickly drive the digital servos such as AX-12 with Arduino directly! Just like using Arduino official servo library.

With this smart arduino digital servo shield and Dynamixel AX series servos, It's quite easy for you to drive multi servos with daisy chain connection with an Arduino board  such as Arduino Uno, and build your robotic dog, hexapod with powerful servos.
This shield Integrates a half duplex circuit inside.That means the transmit wire from UART is connected to all of the AX-12 servos. If a command sending over the wire without servo ID, all of the servos will receive the command, and if the message contains the destination servo ID then only one servo, matching that ID number, will receive it.
Because of the servo can be linked by serial bus, which can link up to 200+ servos. Each unit can feedback its position, rotation velocity, torque, current, motor temperature and so on.It can do rotating all round, and the velocity can be controlled, just act as a gear motor. This feature enables it to work as a motor of wheeled robots, or tracked robots.

NOTE: The new batch servo AX-12 requires a default reset before altering working method. You can see it was written in the sample sketch.