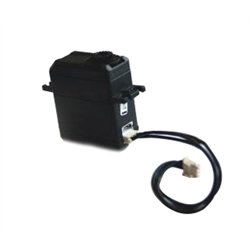 The Uptech CDS 55XX Serial Robot Servo (Robotis Compatible) has been launched with the aim to solve most important problems caused by R/C servos in robot and simultaneously inheriting most of the advantages of them. Because of the advanced position sensor and precise A/D converter gives the high position accuracy, the position resolution in position-mode can be up to 0.3°. The response time is up to 2ms contrast a 20ms of traditional R/C servo.

The CDS series robot servo can be linked by serial bus, which can connect up to 200+ servos. Each unit can feedback its position, rotation velocity, torque, current, motor temperature and so on. The robot built with robot servos can set actions through artificial demonstration, that is, the user can regulate the robot’s joints posture with hands and the robot can record the parameters like location, speed, etc. Then, it is able to automatically play them. So there is no need to set position, velocity parameters of each joint and observe whether the joints right in place or the parameters are appropriate. You just need play and record. "THTurkey"

It can do rotating all round, and the velocity can be controlled, just act as a gear motor. This feature enables it to work as a motor of wheeled robots, or tracked robots. The CDS series robot servo can send alarm signal via the serial bus, or shut down output in condition of over current, over temperature and so on.