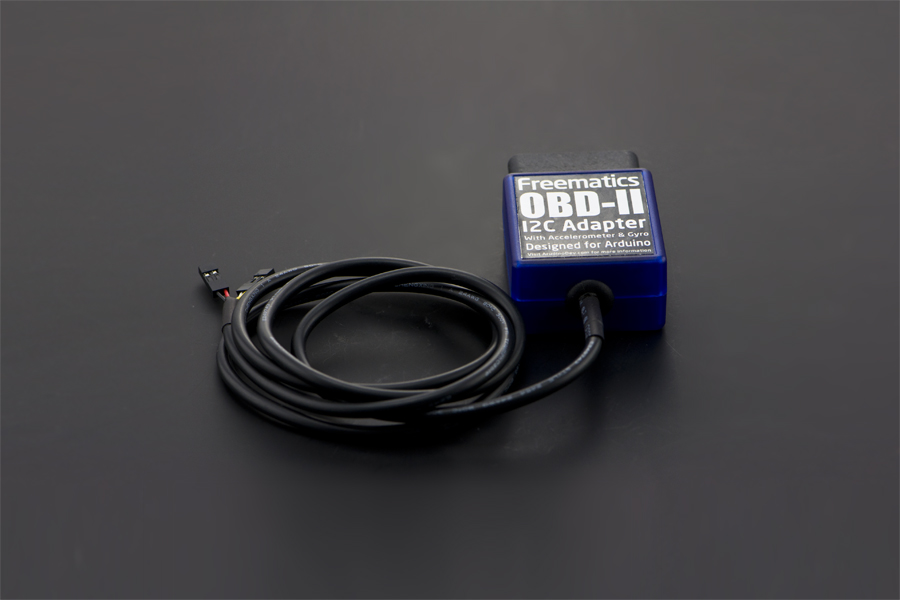 This OBDII I2C Adapter - Accelerometer and GYRO is Discontinued Now. We recommend those Adapter products as a suitable replacement and hope you will find what you are interested in.

This product works as a vehicle OBD-II data bridge for Arduino, providing OBD-II data access with Arduino library as well as power supply (converted and regulated from OBD-II port) for Arduino and its attached devices.

Model B has an additional MPU-6050 (6-axis) or MPU-9150 (9-axis) MEMS module built inside, which provides accelerometer, gyroscope, compass (MPU-9150 only) and temperature sensor all accessible via I2C. Accelerometer can be used for measuring car’s acceleration and steering G-force. Gyroscope & compass can be used for measuing car’s orientation without GPS. When the adapter is plugged and locked in the car’s OBD-II port, the MEMS module inside the case will always stay static to the car body, so the its data can reflect the movement of the car accurately. Programming guides for using the I2C MEMS modules with Arduino are available here for MPU-6050 and here for MPU-9150
Model B connects with Arduino through I2C interface (SDA/SCL). OBD-II data and MEMS sensor data are both accessed via I2C. The OBD library has encapsulated all the necessary I2C operations for OBD-II access.
The adapter plugs into the OBD port usually located under the steering column or slightly to the left of it. To check if your vehicle is OBD-II certified, open your hood and find the sticker that looks like this: