Build your own lightning detector that's smaller, more customizable, and cheaper than a commercial one! 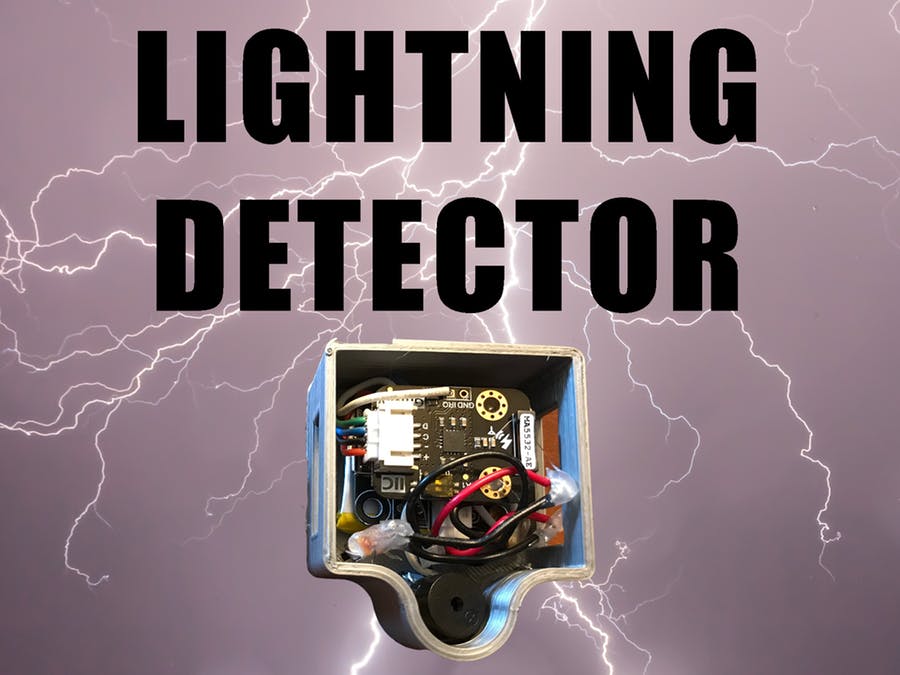 In this project, we'll create a small device that alerts you to nearby lightning strikes. The total cost of all materials in this project will be cheaper than purchasing a commercial lightning detector, and you'll get to hone your circuit-making skills in the process!

The sensor used in this project can detect lightning strikes up to 40 km away, and is also capable of determining the distance of a strike to within a tolerance of 4 km. While this is a reliable sensor, you should never depend upon it to warn you of lightning strikes if you're outdoors. Your own circuit handiwork will not be as reliable as a commercial lightning detector.

This project is based upon the AS3935 lightning sensor IC, with a carrier circuit from DFRobot. It detects electromagnetic radiation that's characteristic of lightning and uses a special algorithm to convert this information to a distance measurement.

This project only requires a few parts. Information is outputted to the user via a piezo buzzer, and the circuit is powered through a lithium ion polymer battery. Below is a complete list of all the parts:

Piezo buzzer (only need one - many different types work)

In addition to these items, you'll want the following tools/items:

I also detail the process of creating a 3D-printed case for this project. If you don't have a 3D printer, operating the device without a case is still fine.

As there's a relatively small number of parts in this build, the circuit is not particularly intricate. The only data lines are the SCL and SDA lines for the lightning sensor and one connection for the buzzer. The device is powered by a lithium ion polymer battery, so I decided to also integrate a lipoly charger into the circuit.

The above image depicts the entire circuit. Note that the connection between the lipoly battery and the lipoly battery charger is via the JST male/female connectors and does not require soldering. See the video at the beginning of this project for further details on the circuit. 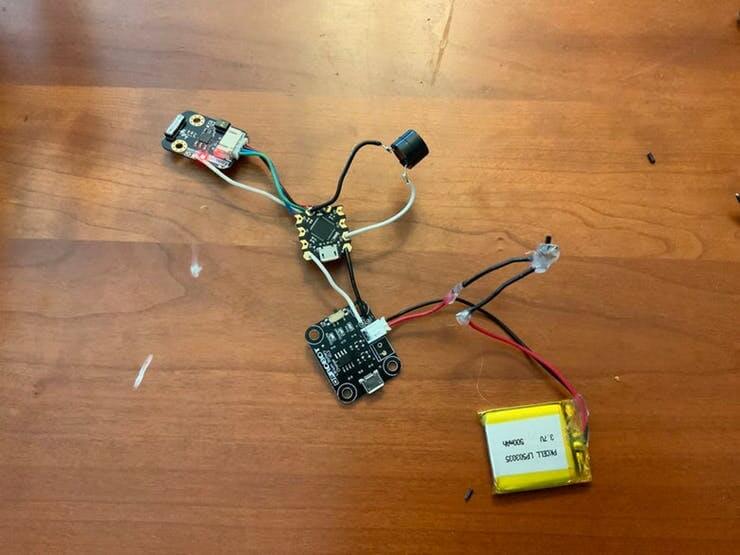 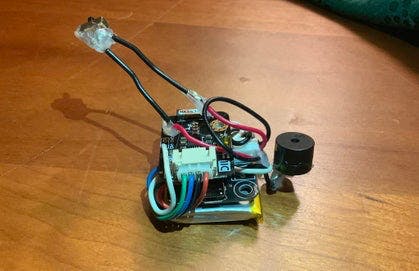 This device is a great candidate for a circuit assembly technique known as free-forming. Rather than affix the parts in this project to a substrate such as a perf board, we will instead just connect everything with wires. This makes the project much smaller, and it is somewhat faster to assemble, but generally produces less aesthetically pleasing results. I like to cover my free-formed circuits with a 3D-printed case at the end. The video at the beginning of this project details the free-forming process, but I will go over all the steps I took textually as well.

I then cut the included 4-pin cable such that roughly two inches of wire remained. I stripped the ends, plugged the cable into the lightning sensor, and made the following connections:

I also connected the IRQ pin on the lightning sensor to the RX pad on the Beetle. This connection needed to go to a hardware interrupt on the Beetle, and the RX pad (pin 0) was the only interrupt-capable pin remaining.

I connected the short lead of the buzzer to the "-" terminal on the Beetle (ground), and the long lead to pin 11. The buzzer's signal pin should be connected to a PWM pin for maximum versatility, which pin 11 is.

The last thing necessary is to add a switch inline to the battery to turn the project on and off. To do this, I first soldered two wires to adjacent terminals on the switch. I fixed these in place with hot glue, as the switch's connections are fragile. I then cut the red wire on the battery about halfway down, and soldered the wires coming off the switch to each end. Make sure you cover the exposed sections of wire with heat shrink tubing or hot glue, as these could easily come in contact with one of the ground wires and make a short. After adding the switch, you can plug the battery into the battery charger.

The last step is to take the gangly mess of wires and components and make it look somewhat presentable. This is a delicate task, as you want to be sure that you don't break any wires. I first started by hot gluing the lipoly charger to the top of the lipoly battery. I then glued the Beetle on top of that, and finally glued the lightning sensor at the very top. I left the buzzer to sit off to the side, as shown in the above image. The final result is a stack of boards with wires running throughout. I also left the switch's leads to run freely, as I later wish to integrate those into a 3D-printed case.

The entire software revolves around interrupts from the lightning sensor. When an event is detected the lightning sensor will send the IRQ pin high, which triggers an interrupt in the microcontroller. The sensor can also send interrupts for non-lightning events, such as if the noise level is too high. If the interference/noise is too high, you'll need to move the device away from any electronics. The electromagnetic radiation coming from these devices can easily dwarf the comparatively weak electromagnetic radiation from a distant lightning strike.

To program the microcontroller you can utilize the Arduino IDE - make sure the board selection is set to "Leonardo." You will also need to download and install the library for the lightning sensor. You can find this here. 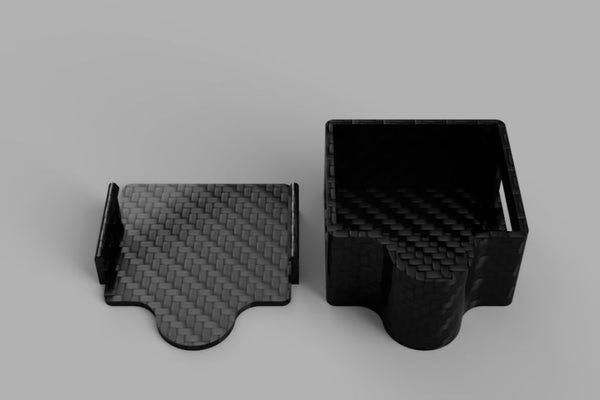 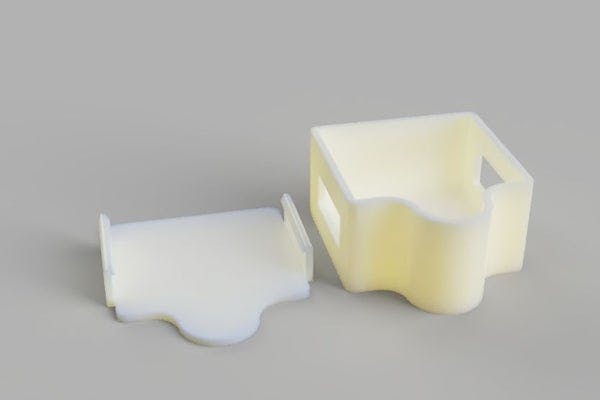 Case Rendered in ABS
I modeled a case for my device. Your free-form circuit will likely have different dimensions, but I tried to make my case big enough such that many different designs can still fit in it. You can download the files here, and then print them out. The top of the case snaps on to the bottom, so no special parts are required for the case.

You can also try making a model of your own device and creating a case for it. I detail this process in the video at the beginning of this project, but the basic steps to follow are as such:

Capture the dimensions of your device

Create a case by offsetting a profile from the device model. A tolerance of 2 mm generally works well.

Step 5: Using Your Device and More

Congratulations, you should now have a fully-functioning lightning detector! Before using the device for real, I recommend waiting until there's a thunderstorm around you to make sure that the device actually is capable of detecting lightning. Mine worked the first try, but I do not know the reliability of this sensor.

Charging the device is simple - you can just plug a micro-USB cable into the lipoly charger until the charging light turns green. Make sure that the device is on while you charge it, or no power will go to the battery! I also recommend changing the beeps to something that you like more; you can use the Tone.h library to generate more pleasant-sounding notes.

Let me know in the comments if you have any problems or questions. To see more of my projects, check out my website www.AlexWulff.com.