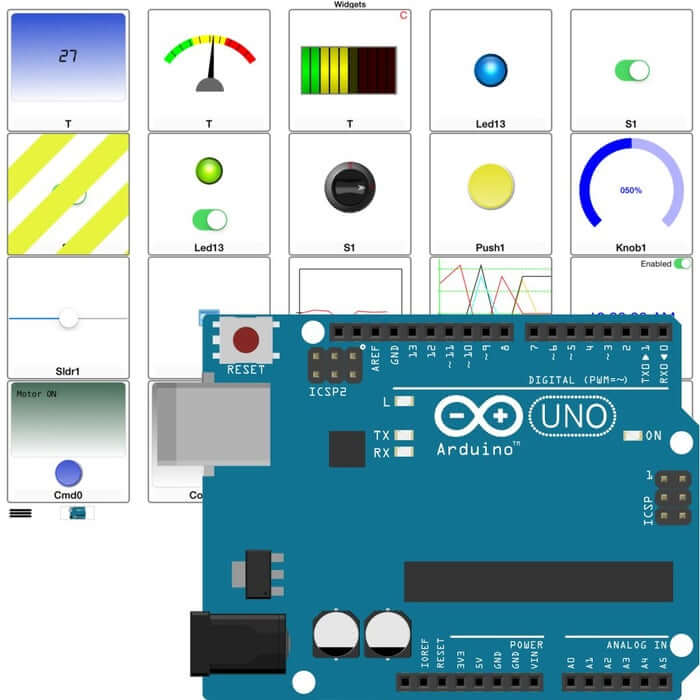 This instructable is about Arduino Manager, a powerful general purpose iOS App which allows to control any Arduino (or Arduino compatible) board by the means of about 40 different Widgets.

Some of the available Widgets are:

Code Generator: This add-on allows to generate the basic Arduino code for supporting the Widgets you have chosen.

PIN Code Generator: Linking widgets to Arduino PINs this add-on dramatically speeds up Arduino code development. In many cases, you don't need to write a single line of code.

Voice Commands: Enables to control most of the Arduino Manager Widgets by the means of voice commands (English only).

Support for ESP32 programmed by the Arduino IDE has been available for many versions since version 15.0.0 Arduino Manager can also work with ESP32 running MicroPython code.

Arduino Manager for iOS is available from the iTunes Store at $7.99. It is also available for Android and Mac OS X (please, note that not all the widgets are available on all the platforms).

Step 1: Initial Setup
This section covers how to install MicroPython on ESP32 and the required development tools.

We assume that Python is already installed and configured on your development computer (you can download Python from here:https://www.python.org/downloads).

The following steps have to be completed only the first time you setup the board with MicroPython.

To set everything up and running follow these steps:

Install rshell and esptools with:

Install MicroPython firmware to the board with:

To connect to the board, use the rshell:

Double check that you are signed in to iCloud

If not, go to Settings and tap "Sign in to your iPhone"

Start Arduino Manager on your iPhone or iPad

Open the left side menu

Go back to the command prompt and issue following command to copy the required software:

Linux Since iCloud is not directly accessible from Linux, you have to use your preferred browser and download the Python/Support folder from iCloud.com to a directory of your choice and then enter the following command 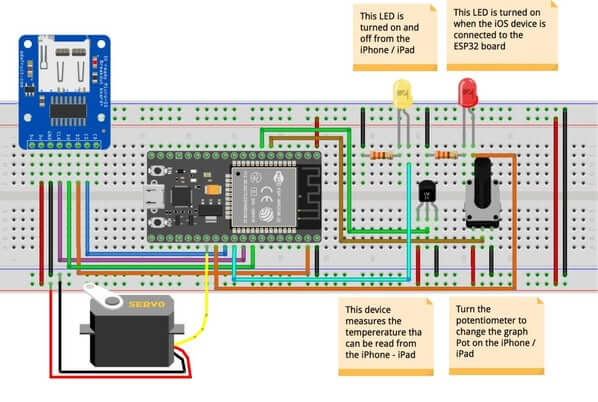 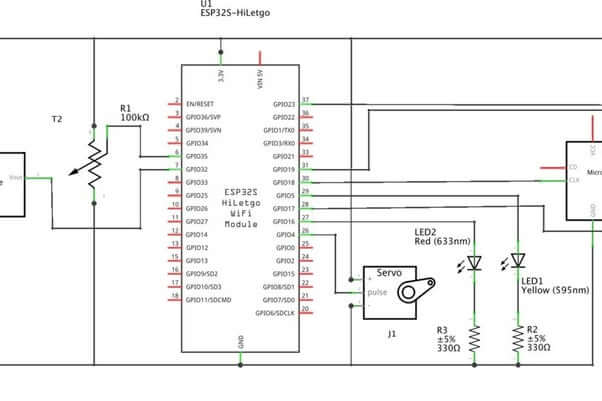 Now we are ready to build a simple test circuit. Refer to the electric diagram and to the breadboard picture to build it.

The board measures Temperature (LM 35) and voltage to the potentiometer and then sends them to the iOS device.

The iOS device sends commands to turn on and off LED 1 (yellow) and commands to move Servo.

LED 2 (Red) shows when the iOS device is connected to the board.

These are the connection fro the SD Card reader:

Use a text editor to open the example code (example.py) directly from your iCloud drive in the folder:

If you are using Linux use your download directory instead

Change the following parameters accordingly with your network

YOUR NETWORK SID
YOUR NETWORK PASSWORD
BOARD IP
BOARD PORT
NETWORK MASK (usually is 255.255.255.0)
GATEWAY ADDRESS

Connect the ESP32 board to your computer and launch the shell

Copy the modified example to the board

Switch to Repl to issue commands to the board entering

Start the example code with

shows up, you are good to go

Note 2: Instead of rshell and repl, you can use more user friendly tools to write your python code and upload it. Some compatible with MicroPython are:

mu-editor (https://codewith.mu/en/). At time of writing, you have to install the beta version which supports ESP32.

Step 4: Connect Arduino Manager to the ESP 32 Board

To connect Arduino Manager to the ESP32 board, follow these steps:

Open the left side menu

Tap on "Connections" to access the connections to the boards

Tap on "Add" to add a new connection

Connection Name: whatever you like. For example ESP32 running Python

IP Address: the same IP value you entered in the example.py

IP Port: the same value you entered in the example.py

Timeout: you can left it unchanged

A Few seconds later the connection indicator on the bottom left side of the screen should turn green and the red LED should torn on.

Tap on field just down the display and enter: T

Double Tap on the Display Widget, tap Configure and switch to Text Only

Tapping on the switch, you should be able to turn the yellow LED on and off

The LED should follow the yellow LED on the board

Moving the dial, the servo motor should change its position

Pressing the button, the red LED should turn off for a few milliseconds and then turn back on

Turning the potentiometer on the breadboard a graph should show up

Add a Timer Widget and enter: A1

When the timer expires, the servo motor is moved to its initial position and the connection LED flashes for a few milliseconds

Double Tap the Widget and the tap Refresh

Tap the button of Cmd_01, the red LED should turn off for a few milliseconds and then turn back on

Every time you press the Cmd_01 button, a message should show up on the Console Widget

Move the widget in the desired position

Swipe down the widget

We have briefly explored some of the features of Arduino Manager and some of the available Widgets. There is much more to see and learn.

The next section is dedicated to learn more about the example python code.

The python code for supporting Arduino Manager is mainly based on some callback functions:

doWork - This function is periodically called, and here goes your code to read sensors, command actuators and so on

processOutgoingMessages - Called periodically to send data to the iOS device

processAlarm - Called when an alarm is fired

In the doWork function the position of the potentiometer is read (pa35.read()) reading the value of the analog to digital converter connected to the analog pin 32. In the same way, the temperature sensor is read and the conversion from voltage to temperature is performed. After that the temperature is saved into in a log file (iosController.sdLog).

The processIncomingMessages is called for each message received and has two parameters:

variable - the name of the widget which is sending data

value - data associated to the widget.

The processOutgoingMessages is called periodically to send data to the connected iOS device.

The doSync function is called only once when the iOS device gets connected to the ESP32 board and sends information for initializing some Widgets like Switch Widget and Knob Widget and the Display Widget configured as Text Only.