Highlights from the ICRA 2015 robotics conference in Seattle 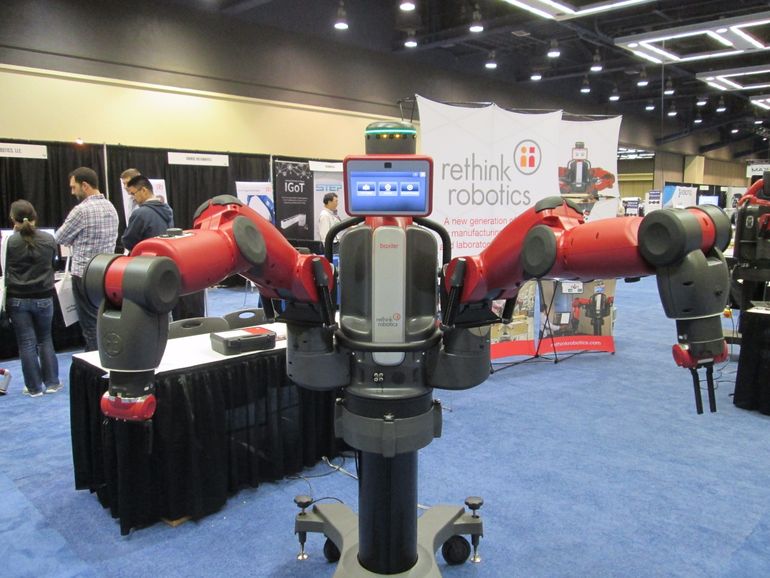 The city of Seattle saw a robotic population explosion this week as the 2015 IEEE International Conference on Robotics and Automation (ICRA) descended on the Washington State Convention Center. The IEEE Robotics and Automation Society’s flagship conference ran the gamut of all things robotic, from showcases of new technology to forums on government policies as they relate to robotics. 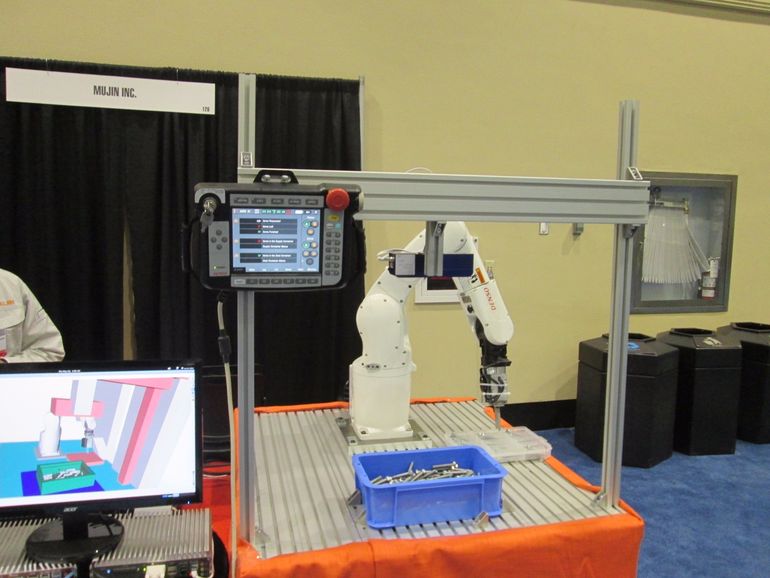 The Washington State Convention Center is no village community meeting hall. It's a major international venue designed to hold events like a World Trade Organization conference, which gives you a sense of the scale of this week's conference that hosted roboticists and students from all over the world.

Attendees were of course encouraged to network and share information. That is, if they had time. With 940 papers being presented, three plenary lectures, 12 keynote speeches, and a bewildering collection of tutorials and workshops on everything from marine robotics to haptics for neuroscience, it's a mystery how anyone had time to chat – much less take in the bus tours to Blue Origin, Boeing, the Fred Hutchinson cancer center, the Veterans Administration Hospital, Amazon, and the University of Washington campus.

But the hub of the conference was the exhibit hall, where sponsors and other companies came to show off, recruit, and sell. Familiar names, such as iRobot and Disney were in attendance, with the latter looking for the next generation of imagineers, as well as publishers like MIT and Cambridge University press, and educational organizations like University of California Berkeley and the University of Washington.

This being a robotics conference for scientists and engineers, many of the exhibitors concentrated on the nuts and bolts aspect of the field, such as Moog Inc, which as showing off its latest generation of servos, and HEBI Robotics, which makes robotic elbow modules that include motors and computers, so robots that can be built where the joint modules act as a team. They illustrated this with a robotic spider that looked a little too lively for comfort. 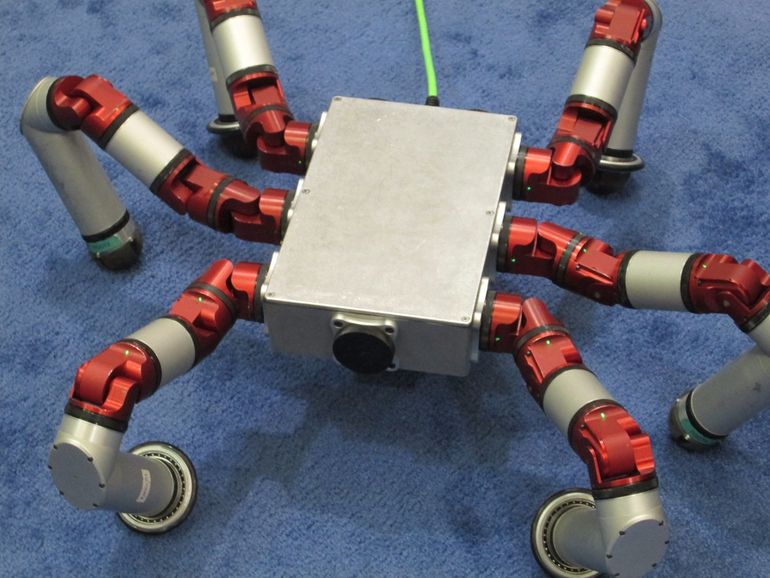 Manipulators were a large draw, with the Schunk company telling us that one of its biggest challenges will be to take its industry-standard manufacturing robot manipulators and adapting them to the more flexible robots of the future. In a similar vein, Shadow Robot had its Dexterous Hand on display, which is an open source manipulator designed around the form and function of the human hand that's aimed at researchers and educators. 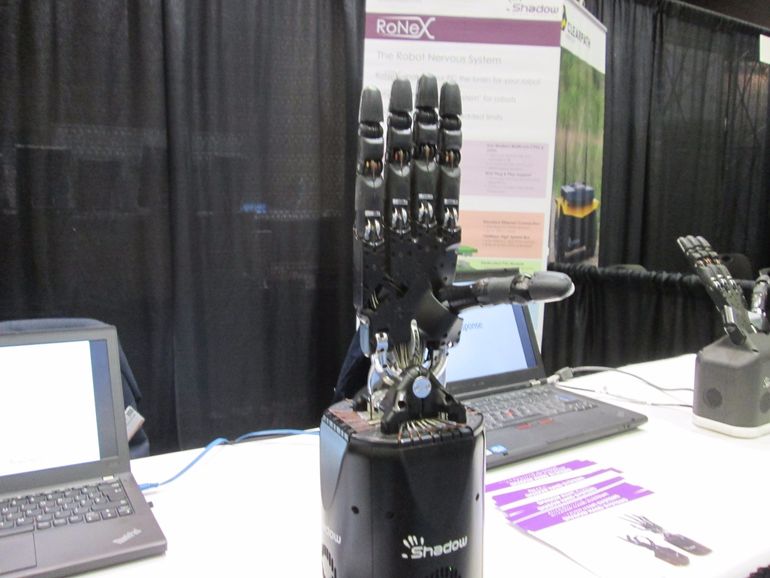 Another interesting research/education robot was Robotis' football-playing humanoid robot. Consisting of a series of servo motors operated by an open-source system, the little robot has apparently done very well in robot football competitions and is so popular that the company had to come up with a smaller, less expensive version for younger students. There's even a 3D printed hand under development with variable grip for the larger version. 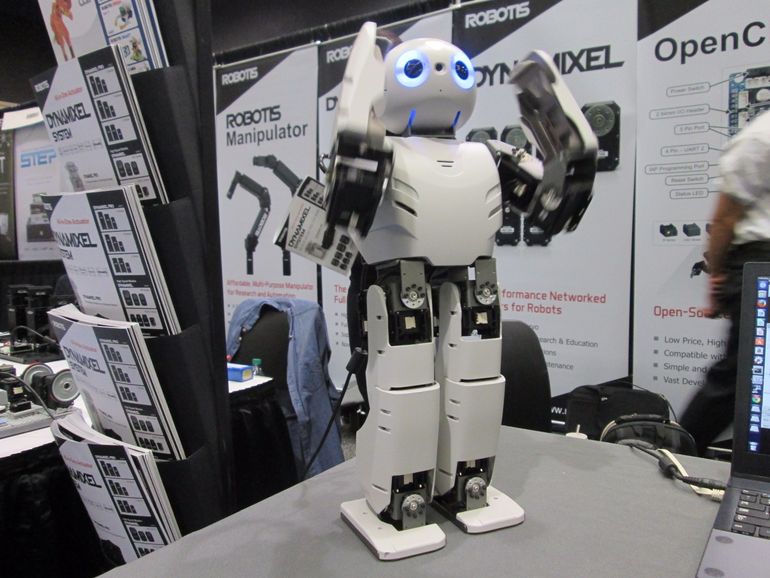 Also running around the exhibit hall (sometimes literally) were the platform robots, such as those made by Adept Mobile Robots, which are customizable platforms covered with lots of hard points for screwing on equipment, such as sensors and manipulator towers. Then there were the more rugged platforms built by Ambit or Clearpath Robotics. These two companies build platforms that at first glance look like miniature tanks or driverless quad bikes.

For those interested in something a bit more hands on, Intuitive Surgical brought along its Da Vinci robotic surgeon, which attendees could try out in a mock operation, while start-up Applied Dexterity had its Surgical Cockpit, which aims at doing what Da Vinci does while giving surgeons less of a sense of operating through a periscope.

Manufacturing and commerce were represented by the makers of complete robotic systems. The famous Baxter robot by Rethink Robotics was on display, though we had to double check that we were at the right booth because so many other exhibitors had incorporated Baxter into their designs.

For warehouse work Fetch Robotics had its tag-team warehouse system on hand.

The factory floor was represented by Mujin, which has developed a new high-speed manufacturing robot, and Smokie Robotics's general purpose arm that demonstrated its ability to carry out various tasks, such as identifying and manipulating objects, or quality control testing of tablet styluses.

Meanwhile, Suitable Technologies concentrated more on meeting than manufacturing with demonstrations of its BeamPro and Beam telepresence robots.

The part of the conference that seemed to generate the most excitement were the challenges intended to spur invention and technology sharing. The most prominent (and certainly taking up the most floor space) was the Amazon Picking Challenge, where international teams of students competed for US $26,000 in prizes to develop robots that can pick objects off unstructured shelves. The idea Is to remove designated items from the shelves and place them on a table while being scored for speed, accuracy, and mechanical errors.

Other challenges included the Humanoids Application Challenge, which saw creating vision-capable humanoid robots to carry out practical tasks, such as a skiing robot to help in mountain rescue operations. The Mobile Microrobotics Challenge saw robots the size of the thickness of a human hair go through tests of autonomy, accuracy, and assembly, and the Humanitarian Robotics and Automation Technology Challenge took on the serious task of identifying and classifying landmines for removal.