Watch Flying Machines Weave A Rope Bridge You Can Walk On


Using quadrocopters and some rope, researchers have woven together a bridge strong enough to walk across.
Made at the ETH Zurich Flying Machine Arena in Switzerland, the bridge joins two scaffolds, and is the first full-scale load-bearing structure autonomously built by flying machines. The feat represents one more step in the field of robotic aerial construction [1, 2].

Except for the metal scaffolding at either end of the structure, the bridge itself consists exclusively of Dyneema rope, a tensile material with a low weight-to-strength ratio that makes it ideal for aerial construction. Weighing just 7 grams per meter, a 4 mm diameter Dyneema rope can sustain up to 1300 kg. The 7.4 m long bridge uses various rope techniques – knots, links and braids [3] – and has a total rope length of about 120 m.


The project was developed at the Flying Machine Arena [4], a research and demonstration platform for aerial robotics. The arena is equipped with a motion capture system that provides vehicle position and attitude measurements for the small custom quadrocopters. An offboard computer runs the algorithms and sends commands out to the ?ying machines via a customized wireless infrastructure.

Before construction begins, the location of the scaffolding is measured and input to the system. Once the anchor point locations for the rope are known, all the connections and links of the bridge’s primary and bracing sections are — without human intervention — autonomously woven and secured into place by the quadrocopters, which are each equipped with a motorized spool that allows them to control the tension of the rope.

A plastic tube guides the rope to a release point located between two propellers. The system estimates the external forces and torques exerted on the quadrocopter by the rope during deployment, and takes this into account in order to ensure that the quadrocopters behave as desired [5]. 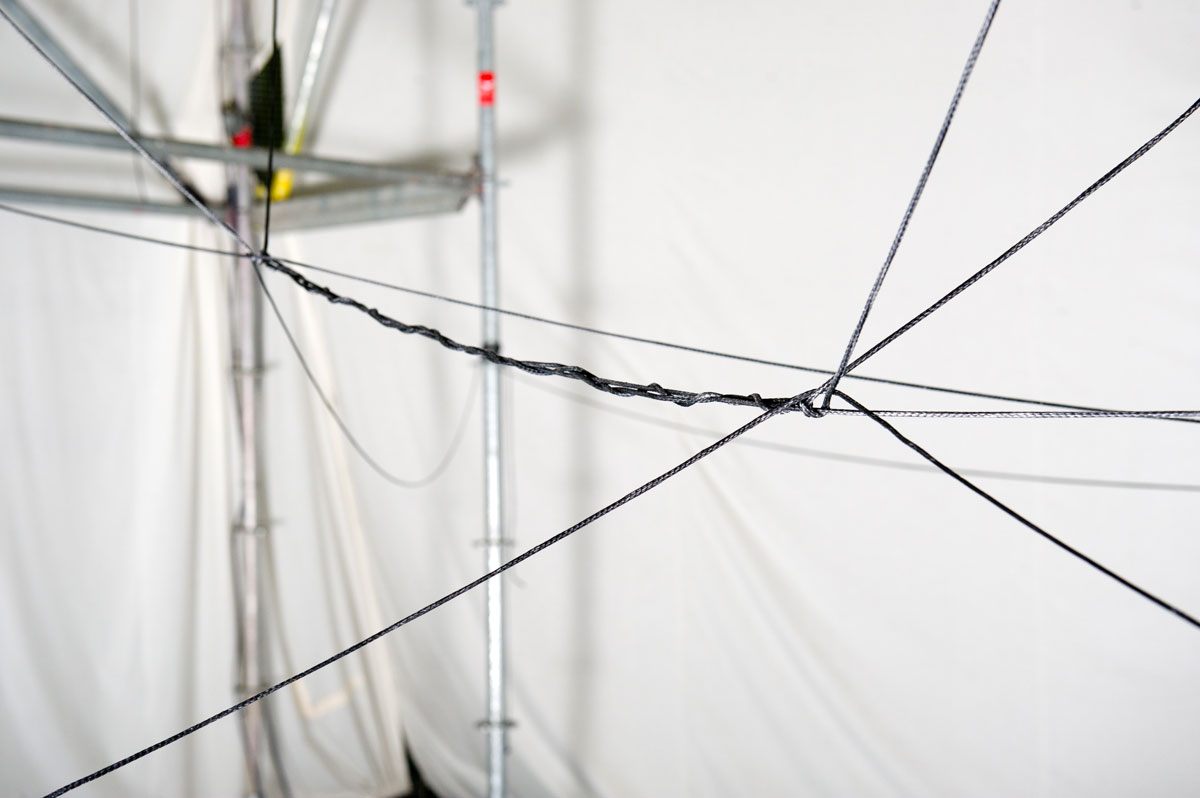 The researchers then walk across the bridge to demonstrate its load-bearing ability.

Once the bridge itself is constructed, stabilizers are added to make it easier for a person to cross. Because there are no sensors to detect the rope’s configuration, the locations of the narrow openings of the bridge must be measured and input to the system, which then adapts the quadrocopters’ trajectories in order to weave the stabilizers.

The team also developed a series of computational tools to help identify and design the kinds of novel structures that are buildable using flying robots. Using these tools, the researchers can simulate their designs, determine feasible construction sequences, and evaluate the structure before they begin building [6].

More information and related publications can be found on the project websites:


Aerial Construction is a collaboration between the Institute for Dynamic Systems and Control and Gramazio Kohler Research at ETH Zurich, Switzerland, 2015.