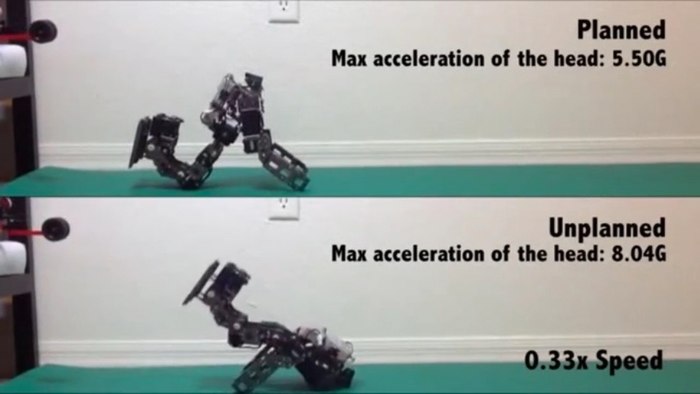 A team of researchers from the Georgia Institute of Technology has developed an algorithm that teaches robots how to fall, allowing them to trip up with a little more grace, and hopefully cause themselves less damage when they do.

The new study builds on previous research that took inspiration from felines' innate ability to land on their feet. That project, conducted last year, involved studying the cat righting reflex, then designing an experiment that simulated a long drop, giving the robot enough time to right itself.

The new research builds on the knowledge from that study, but takes things a little further. Being able to fall correctly is a key skill, and teaching it to robots could make them a lot more practical. For example, it makes robots working on construction sites less likely to cause damage to themselves and others, and could allow for safe use around children or the elderly.

Additionally, if robot fall damage can be minimized, it would not only reduce the risk of harm to those around it, but also lower repair costs after an incident, which given the sophistication of the equipment involved, could be significant.

The new algorithm, developed by Georgia Tech's Professor Karen Liu and PhD graduate Sehoon Ha, works by determining the cause of the fall to determine the angle of the landing. It then takes into account the hardware constraints – such as how fast the robot can realistically move – before suggesting a sequence of movements that will allow for a steady and safe slowing of momentum.

"We believe robots can learn how to fall safely," says Ha. "Our work unified existing research about how to teach robots to fall by giving them a tool to automatically determine the total number of contacts (how many hands shoved it, for example), the order of contacts, and the position and timing of those contacts. All of that impacts the potential of a fall and changes the robot’s response."

According to the team, it's a pretty versatile solution, telling a robot how to right itself after small stumbles, to moving into a rolling motion to recover from a high-speed fall.

The researchers presented their findings at the IEEE/RSJ International Conference on Intelligent Robots and Systems in Hamburg, Germany. You can see the algorithm in action during testing with a BioloidGP humanoid robot in the video below.