The objective of this ESP32 Arduino Tutorial is to explain how to set a soft AP using the ESP32 and the Arduino core. The tests of this ESP32 tutorial were performed using a DFRobot’s ESP32 module device integrated in a ESP32 development board.

The objective of this post is to explain how to set a soft AP using the ESP32 and the Arduino core. This way, other devices can connect to the ESP32 and exchange data with it without the need to connect to a conventional router.

This may useful, for example, to configure the ESP32 before actually connecting to a Wireless network, in a commercial product. With this feature, we can serve a simple HTML page that the user accesses to input the credentials from his home network, in order for the ESP32 to later connect to it.

In this introductory tutorial we are simply going to explore the basics of setting the soft AP, since many other functionality can then be built on top of it.

The tests of this ESP32 tutorial were performed using a DFRobot’s ESP32 module device integrated in a ESP32 development board.

First of all, we are going to include the WiFi.h library, which exposes an extern variable called WiFi that we are going to use to set our soft AP. This is the same variable we have been using in other tutorials to connect to WiFi networks.

After this, we will do the remaining code in the Arduino setup function. We begin by starting a serial connection, so we can output some results of our program. This way, we can check the results in the Arduino IDE serial monitor.

After this, to set our soft AP, we simply need to call the softAP method of the WiFi extern variable, passing as input both the SSID and the password defined before.

Note that this function has some more optional parameters that have default values assigned. These are the channel, an integer specifying if the SSID should be hidden and the maximum number of connections. Besides that, the password is also an optional parameter that defaults to null, which would allow to connect to the AP without a password. Nonetheless, for our example, we specified it.

To finalize, we are going to obtain and print the IP of the soft AP by calling the softAPIP method of the WiFi extern variable. This method takes no arguments and will return the IP address.

The final source code for this ESP32 tutorial can be seen bellow. It includes all the previously analyzed code and some additional prints to make the output more easily readable.

To test the code, simply compile it and upload it to the ESP32 board using the Arduino IDE. After the procedure is finished, open the serial monitor of the Arduino IDE. You should get an output similar to figure 1, which shows the IP of the soft AP.

Figure 1 – Output of the program.
Then, if you check the available networks on your computer, a new one should be listed, with the name we defined in the code, as shown in figure 2. 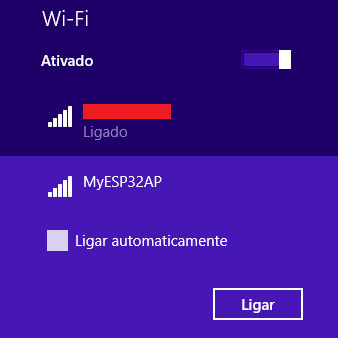