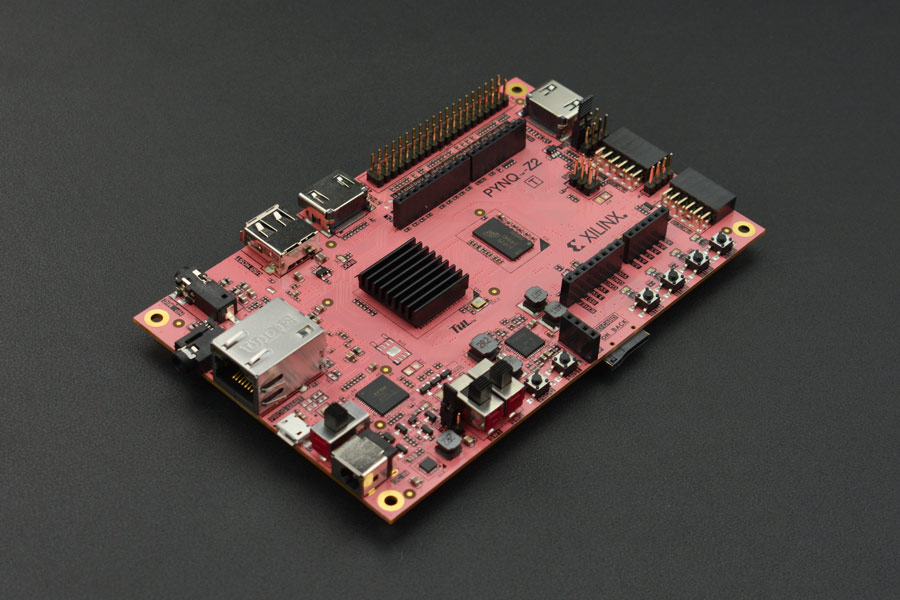 PYNQ-Z2 is a FPGA development board based on ZYNQ  XC7Z020 FPGA, intensively designed to support PYNQ, a new open-sources framework that enables embedded programmers to explore the possibilities of xilinx ZYNQ SoCs without having to design programming logic circuits. Benefiting from programmable logic and advanced ARM processor in ZYNQ, designers can build up more powerful embedded systems with it. Besides, the SoCs can be programmed in Python and the code can be developed and tested directly on the PYNQ-Z2. The programmable logic circuits are imported as hardware libraries and programmed through APIs in basically the same way that the software libraries are imported and programmed. PYNQ-Z2 board integrates Ethernet, HDMI Input/Output, MIC Input, Audio Output, Arduino interface, Raspberry Pi interface, 2 Pmod, user LED, push-button and switch. It is designed to be easily extensible with Pmod, Arduino, and peripherals, as well as general purpose GPIO pins.

What is PYNQ? PYNQ (Python On Zynq) is an open-source project from Xilinx® that makes it easy to design embedded systems with Xilinx Zynq® Systems on Chips (SoCs). Using the Python language and libraries, designers can exploit the benefits of programmable logic and microprocessors in Zynq to build more capable and exciting embedded systems. PYNQ users can now create high performance embedded applications with: parallel hardware execution, high frame-rate video processing, hardware accelerated algorithms, real-time signal processing, high bandwidth IO, low latency control. PYNQ utilizes the best advantages of ZYNQ and Python. It has been widely used for machine learning research and prototyping. Use this board with our DF Arduino or Raspberry Pi expansion shield, ultimate possibilities waiting for you!