The micro:bit measures magnetic force with microteslas (µT) (means the strength of the magnet).

Download the program and observe the readings when we put the magnet near or away from the microbit. This is to determine the value of f in the later in the second program. Your results will be different from mine depending on the strength of your magnet.

The micro:bit has to be calibrated the first time that it is used, so that the readings that it produces are accurate.
When you load a program into the micro:bit and your program tries to read from the compass, it will scroll the words TILT TO FILL SCREEN on the screen. Hold the micro:bit horizontally and tilt it on the spot trying to fill in the screen.

On start, we will tell microbit which pin is connected to the ring led and the number of LED used.
We will turn off all the leds when the micro:bit is initially powered on.
We introduce a  variable f. We put a magnet near to the micro:bit, if the magnetic force strength(f) is greater than 100, a heart shape will appear and turn on the led ring. When f is less than 100, we clear the screen and turn off the led ring. 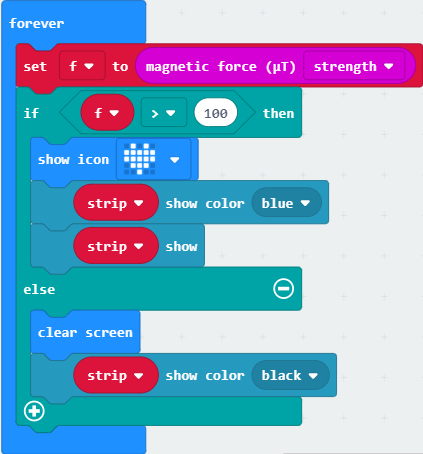 You can change to any color that you like.