This awesome project is originally made by  RichP on https://www.wemustbegeeks.com. Following is the originally text. 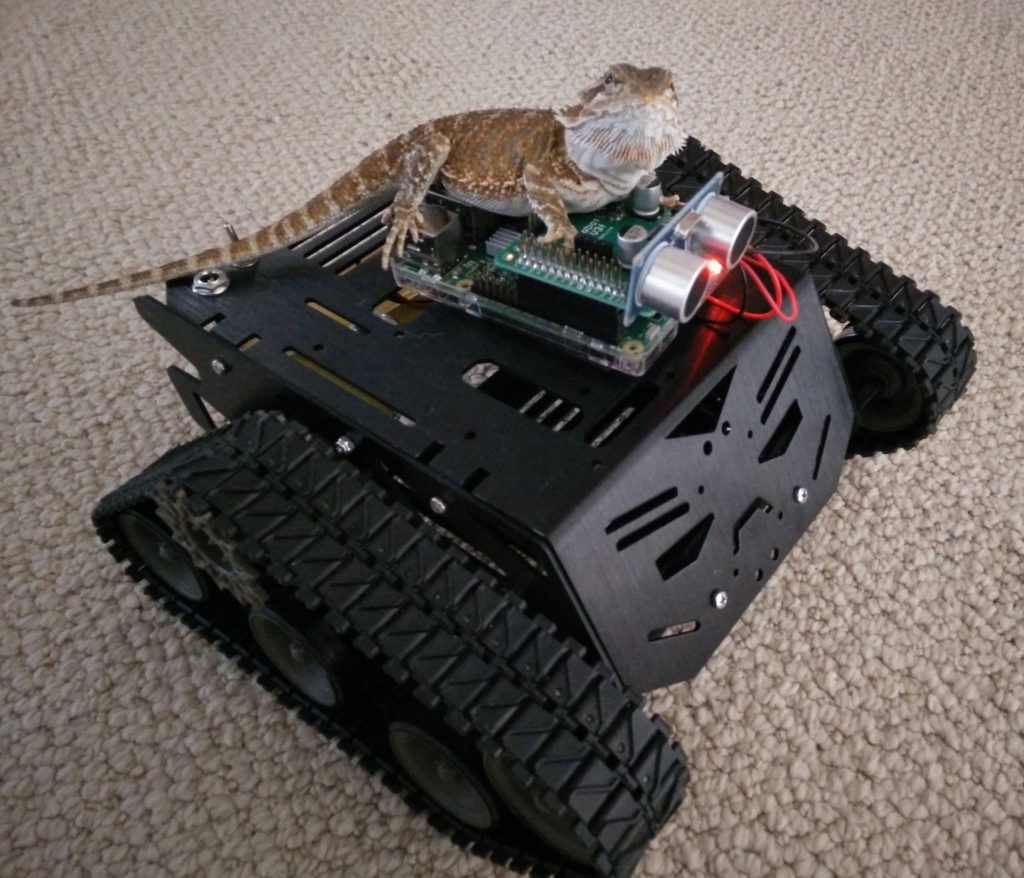 You may have seen a few pictures of Rex our bearded dragon on top of a Tank Treaded Robot in some of my other posts. In this post I will go though the initial assembly and build of the DFRobot Devastator Tank Treaded Tracked Robot (although I have a feeling this will be an ever evolving project!)

DFRobot now has 2 Devastator Robotic kits available: one with plastic bodied motors and one with all metal higher torque motors.

The metal gear motors are better suited to outdoor use and also increase the load capacity of this robot. As per DFRobot these are some of the improvements:

It will likely cost you more than $20 to upgrade the plastic motors to metal motors. (It cost over $30 just for the 2 Metal DC motors on DFRobot’s site. Maybe we can find them elsewhere.)

The all metal motors weren’t available when I purchased my kit, so this build is based on the plastic bodied motors. Also, I believe DFRobot has made some minor changes  to the new versions making them even easier to put together.

Everything came well labeled and the instructions were fairly easy to follow(as in better than Ikea). Updated instructions are available online via PDF here: https://github.com/Arduinolibrary/DFRobot_Devastator_Tank_Mobile_Platform/blob/master/ROB0112.pdf?raw=true

I suggest you do a parts inventory and also read through the instruction thoroughly before you get started with your assembly.

It took me one evening, maybe about 4 hours, to assemble the entire robot and get some basic working code running.

I already had the following parts on hand which made this build possible in one night:

We had played with the Monk Makes RaspiRobot previously on an old RC car. It is a motor controller hat that attaches to a Raspberry Pi. It includes a built in socket for the HC-SR-04 Rangefinder, I2C headers, 2 built in LEDs, 2 open collector buffered outputs and it can also power the Raspberry Pi(when supplied with power itself). it can also be used to control 1 stepper motor.

You can check out the Github Python library here: https://github.com/simonmonk/raspirobotboard3

Here’s an example of the code to make a robot move forward:

I didn’t run into any major snags during the assembly of the robot and maybe only sweared the Tech Gods 1 or 2 times.

The hardest part of the assembly was removing a few tread sections to get them tight enough, but DFRobot has a page dedicated to those instructions:

Left and Right Side Shocks and Roller Mount Assemblies

Right Side Rollers and Driver

Top Plate Mounted and We’re Started to look like a Tank!

Treads Mounted and it looks great! Need to remove some tread sections though.

Raspberry Pi with RaspiRobot Mounted and Powered Up

Close Up of RaspiRobot Mounted on Raspberry Pi