We’ve given you a brief idea of what Arduino is and how it works, as well as some theory behind digital and analog signals. Now let’s start making some real stuff. We will start with the basics: how to make an LED blink.In the previous session, we’ve used the blink program to test the microcontroller. This time we’ll attach our own LED to digital pin 13 instead of using the microcontroller’s integrated LED.

Connect the Digital Piranha LED-R module to digital pin 13 on the DFRduino UNO microcontroller (as arduino uno). Make sure your power, ground and signal connections are correct or you risk damaging your components.

When all your connections are made, connect the arduino microcontroller to your computer via the USB cable. 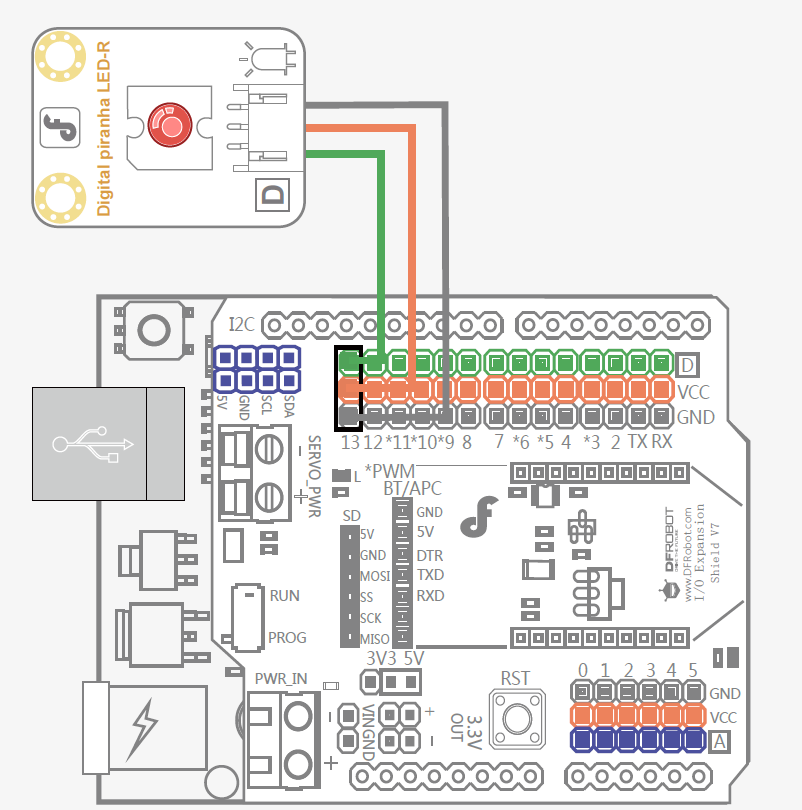 In the previous sessions, we’ve mentioned inputs and outputs. The device we will make is composed of two parts: a control and an output. The arduino microcontroller is the control unit and the digital Piranha LED-R module is the output unit. No input unit is included in this particular device.

Open Arduino IDE.
You can open the program by navigating to File > Examples > 01.Basics > Blink
(Although we encourage you to type the code out by hand to develop your skills).

Once the code is input and you are happy with it, click “Verify” in Arduino IDE. The IDE will check the code for errors. If there are no errors, you are ready to upload. Click “upload” and Arduino IDE will upload the code to your microcontroller. When the upload is complete, your external LED will blink!

Now let’s review the program and see how it works:

A program is composed of two main parts:

This part of the code is executed after void setup(){.

Once initialized, it runs in a loop forever (or until the device is powered off or a component fails). This is where all the key arguments of the code are contained.

The code above shows that ledPin is set up as the output mode.
The comma in the brackets is the code syntax and needs to be there to separate the parameters.

The code above shows that ledPin is set up as the output mode.
The comma in the brackets is the code syntax and needs to be there
to separate the parameters.
What is ledPin?
Examine the first line of the code below:
int ledPin = 13;

Here we have assigned pin13 the variable name “ledPin”. In other words ledPin represents pin 13 on the microcontroller “int” stands for integer and means that ledPin is an integer data type.

What if you want to attach the LED to pin10 instead of pin13?

You just have to change the pin value in the code from 13 to 10.

Let’s take a look at the loop() function, which contains only
one function: digitalWrite().

The syntax of the function
digitalWrite() is as follows:

// Item One—LED Blink
/ *
Description: LED on and off
alternately every other second
*/

Anything written after “//” or inside “/*… */” will not be compiled. These are code annotations. We use these to write comments about the code in plain English. “//” will comment for one line of code. “/ *…*/” will comment for multiple lines. Arduino IDE will help us recognise annotations by turning the text grey, and the compiler will ignore the text when code is uploaded. There are no limits for how many annotations you can make on a program.

Try to make the LED light blink faster or slower. For example, keep the LED light off for 5 seconds and then quickly blink for 250 milliseconds.

There is also another arduino starter kit with 15 arduino projects  for you to choose.

Arduino Projects 1: How Does a Device “Think”?
PROJECTS Arduino